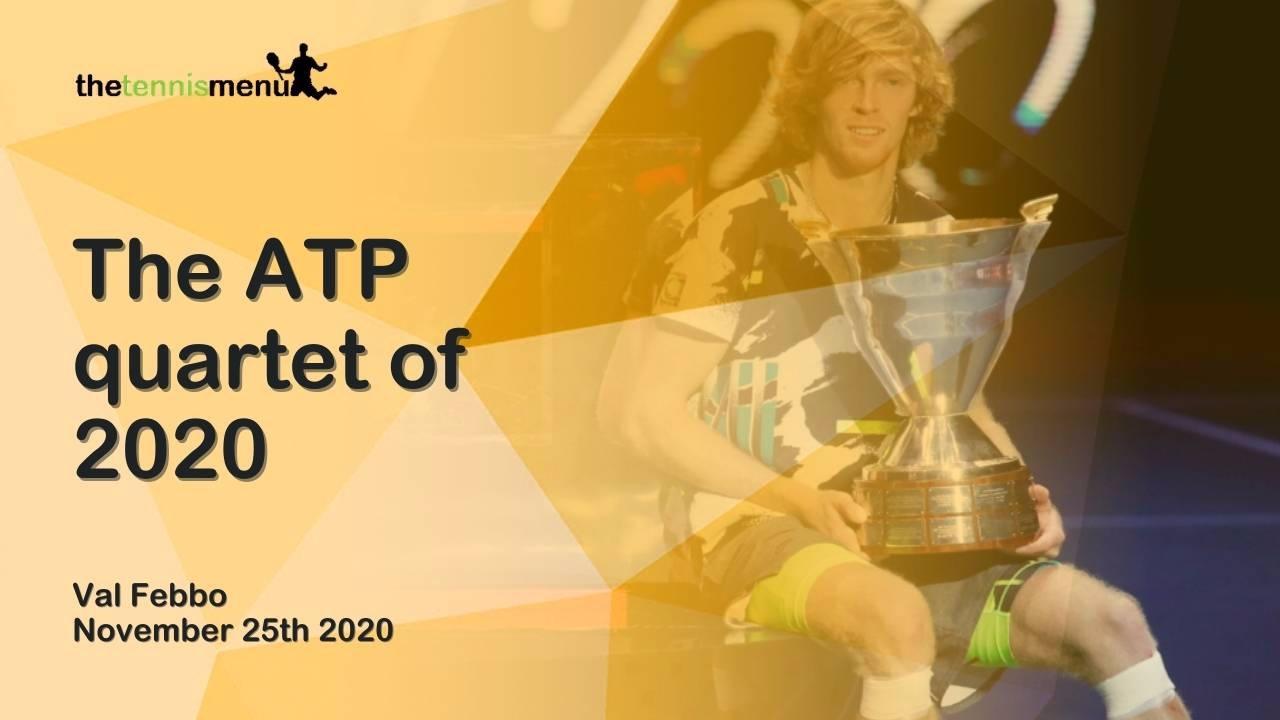 As we hit the culmination of the ATP Tour in 2020, reflecting on the season that was is a reminder that this calendar year is one that historians will always turn their attention to, as well as fans asking a plethora of questions

Who won the Covid Slams? They played with no crowds? They were locked in bubbles? They ignored social distancing parameters?

With so many standouts in this weird and whacky year, finding four is a task, but after our WTA piece we have to do the same for the ATP.

From heartbreak to ecstasy, Thiem’s 2020 starting with an agonising defeat in the Australian Open final to becoming a Grand Slam champion at the year’s next major at Flushing Meadows. 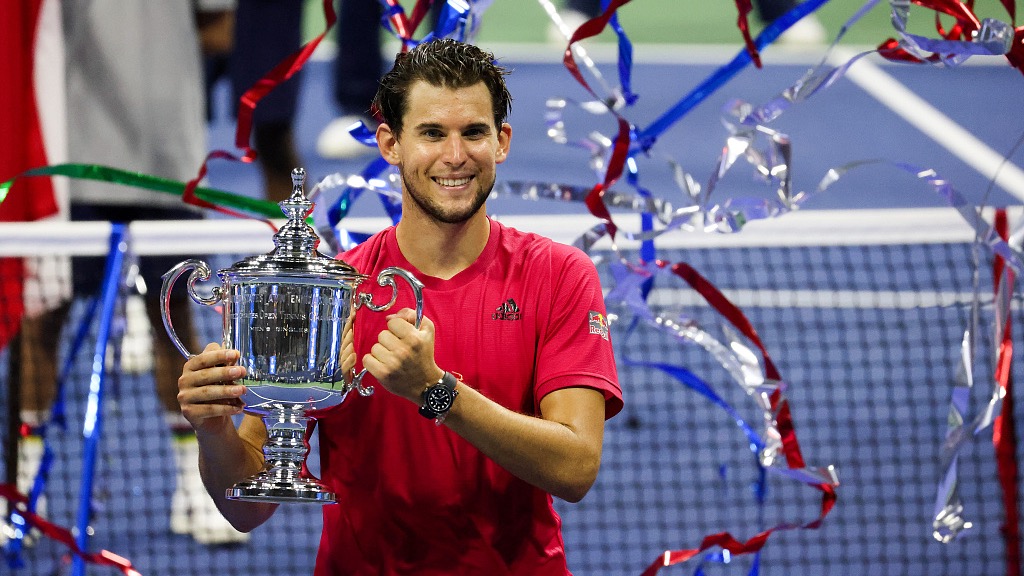 Dominic Thiem was sensational at the US Open

After an inconsistent ATP Cup, the Austrian entered Melbourne Park with some question marks around where he was at compared to the Big Three of Federer, Nadal and Djokovic. However after the fortnight in which he squandered a two-sets-to-one lead against Djokovic in the final to lose in five, he announced himself as one of the heir apparent. He defeated Nadal and Zverev en route to the decider.

Following his exploits in Melbourne he would be upset by Italian World No.128 Gianluca Mager in Rio de Janeiro in the quarterfinals before the tour suspension.

Following the resumption of play in Cincinnati/New York Thiem was obliterated by Philip Krajinovic 6-2 6-1, leaving him little match practice before the US Open the next week.

The Austrian however, would breeze through his first three rounds for the loss of just one set to 2014 champion Marin Cilic. His best tennis was yet to come, storming to the final with magnificent displays against Felix Auger-Aliassime, Alex de Minaur and 2019 runner up Daniil Medvedev.

In the final against Alexander Zverev, he became the first man since Gaston Gaudio at the 2004 French Open to emerge from a two set deficit in a major final and win in five, entrenching his name in history as a Grand Slam champion, the first new major winner since Cilic in 2014.

His fatigued body would see him reach the quarterfinals of the French Open after a challenging draw before falling to Argentine Diego Schwartzman in a five hour epic before another quarterfinal in his home nation in Vienna.

The conclusion of his year resulted in Thiem reaching his second consecutive final at the ATP Finals, where he would defeat Djokovic and Nadal in epic encounters before falling to Medvedev in a tight three setter. He finishes the year at No.3 in the world and as a major champion.

A strange, strange year for Novak Djokovic, on court he was phenomenal for the most part but off it there was much damage control.

He went undefeated up until the US Open, helping Serbia win the inaugural ATP Cup, lifting an eighth Australian Open trophy, the title in Dubai and then in Cincinnati/New York.

However it was his social media exploits and ill fated Adria Tour that marred what should have been talk about his tennis, and rightly so. Djokovic showing no remorse for the shortcomings of his tour despite ignoring social distancing parameters as Covid spread to him and many others around the tour, he encouraged charlatans on his Instagram account and made outlandish comments about vaccines. 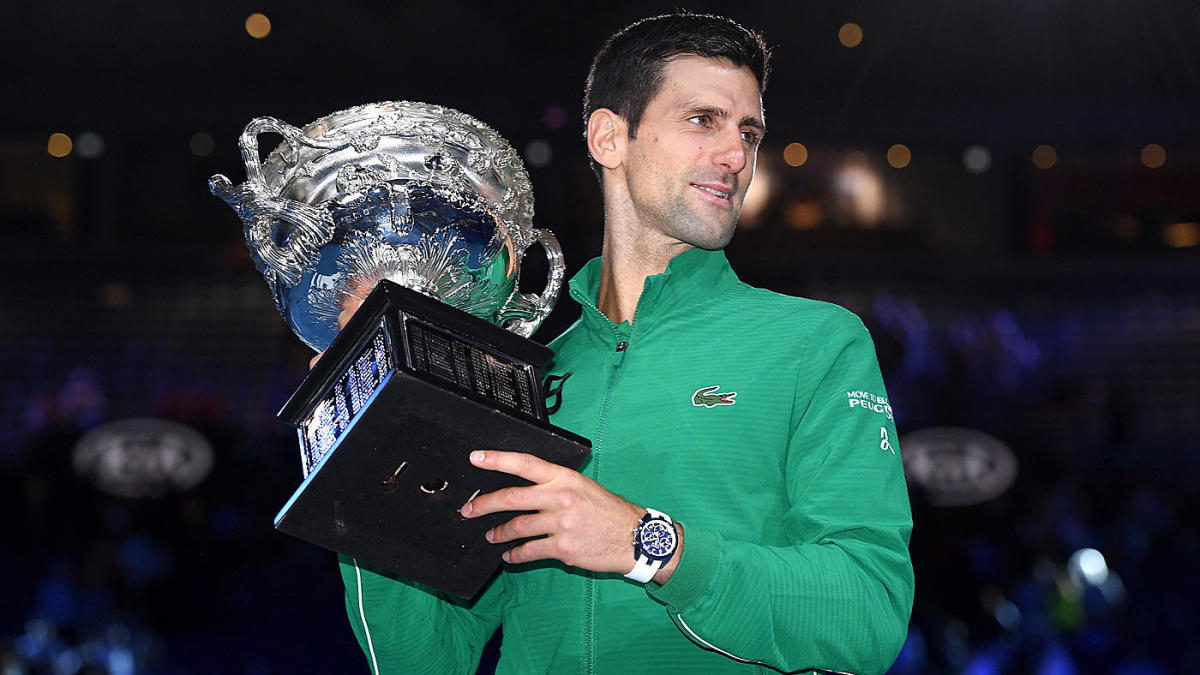 Novak Djokovic was simply unbeatable to start the year

Then, the proverbial hit the fan on court at the US Open when in search of a 27th straight win to start the year against Pablo Carreno Busta, he hit a wayward ball into lineswoman Laura Clark causing him to be defaulted.

Following the default, he would win the Masters 1000 title in Rome before reaching the Roland Garros finals where he was destroyed by Rafael Nadal 6-0 6-2 7-5.

He would sure up his year end No.1 in Vienna but even there he was soundly beaten by Lorenzo Sonego 6-2 6-1 before heading to London for the ATP Finals.

There he would win his group matches against Alexander Zverev and Diego Schwartzman but fall comprehensively to Daniil Medvedev. He managed to reach the semifinals before falling in an epic to Dominic Thiem in almost three hours.

He finished the year as No.1 for the sixth time, equalling Pete Sampras’ record and recorded four titles.

What a year for the young Russian who stormed into the top 10 with some brute force and tantalising panache.

The 23-year-old would open his season with eleven straight wins, including back to back titles in Doha and Adelaide before the Australian Open where he would reach the fourth round where he fell to Alexander Zverev. 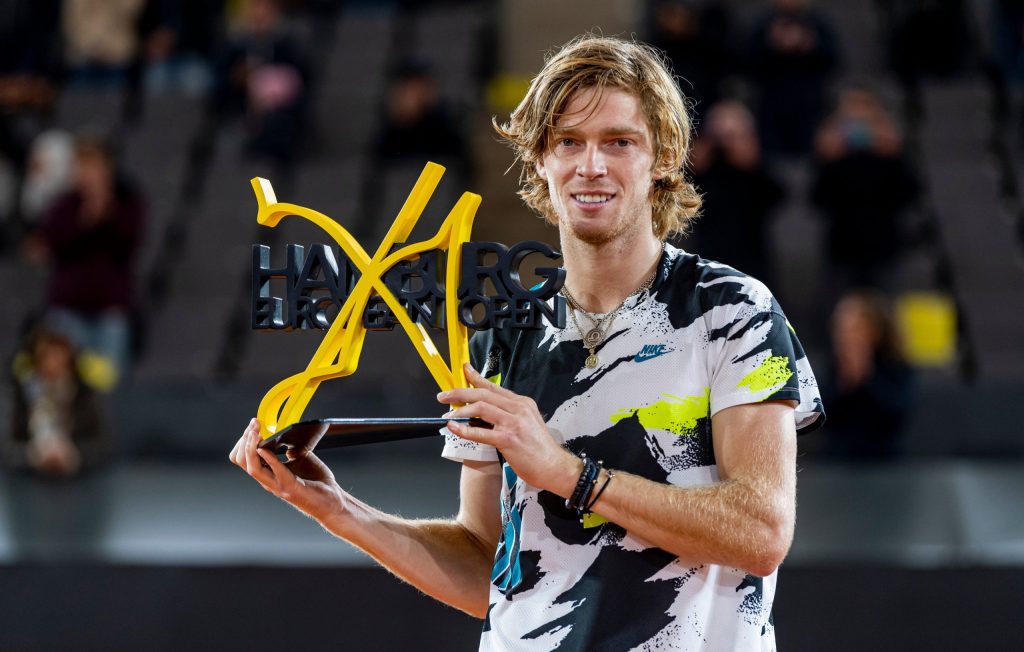 Andrey Rublev led the tour with titles in 2020 with five

He would reach consecutive quarterfinals in Rotterdam and Dubai prior to the tour’s Covid shutdown, and on resumption he would lose his opening match of Cincinnati/New York to Dan Evans before storming to his second US Open quarterfinal for the loss of just one set.

There he went down to compatriot and friend Daniil Medvedev in straight sets before a second round loss in Rome to Hubert Hurkacz.

From the Italian capital he would head to Germany where his third title of the year was waiting, coming from behind in an epic final against Stefanos Tsitsipas to record a famous victory.

After a difficult Roland Garros draw the Russian would reach another major quarterfinal, but in this match against Tsitsipas he would falter as the young Greek rectified the result from their previous encounter.

Rublev was not deterred, winning consecutive titles for the second time this year in St Petersburg and Vienna, entrenching himself inside the top 10 for the first time, and with a third round appearance in Paris, he was heading to the ATP Finals.

In London he would lose his opening two matches to Rafael Nadal and Stefanos Tsitsipas, but round out his week with a win over Dominic Thiem and finish the year eliminated but with a tour leading five titles and 41 wins, with a career high ranking of eight.

The 170cm Argentine was never supposed to have a year like this with many pundits believing that his ceiling had well and truly been reached.

However, he proved them wrong with a sensational and consistent brand of brutally physical tennis that would see his ranking sky rocket into the top 10. 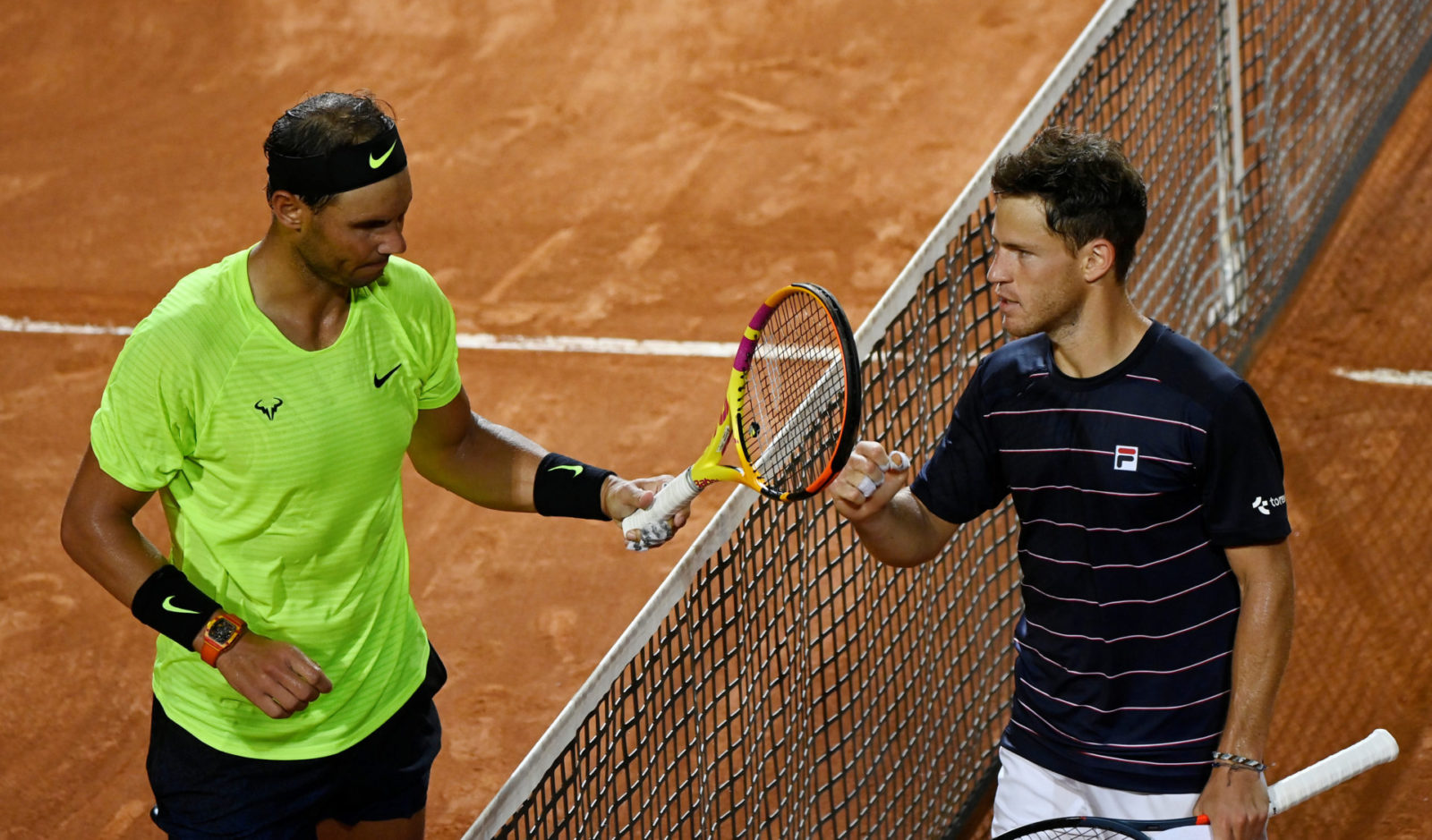 He would only win one of four matches at the ATP Cup, but a steely fourth round performance at the Australian Open established that he will always be up for the fight.

In February he would reach the final in Cordoba in his home country, falling to Christian Garin, before having to pull out of his semifinal in Buenos Aires against Pedro Sousa before a ball was hit.

Following the resumption of the tour American Reilly Opelka would account for the Argentinean in Cincinnati/New York in a true battle of David and Goliath, with Opelka sitting 41 centimetres taller.

The US Open would not prove fruitful, as Schwartzman began to suffer cramp and squander a two set lead against Cameron Norrie in the opening round before heading to Europe for the clay swing.

He would reach the quarterfinals in Kitzbuhel before a magnificent run to the final in Rome in which he would belt Rafael Nadal for the first time in ten meetings in the quarters. Ultimately Novak Djokovic would be too good in the decider but the confidence was high before the French Open.

In Paris, Schwartzman would reach the quarterfinals without losing a set before producing a physical masterclass against US Open champion Dominic Thiem to prevail in a five hour epic, reaching his maiden Grand Slam semifinal and a venture into the top 10.

It was to end there with Rafael Nadal extracting his revenge from their encounter in Rome as he went on to win a 13th Roland Garros crown.

Schwartzman would reach a final in Cologne the next month where Alexander Zverev accounted for him easily. Following that was a quarterfinal loss in Paris to Daniil Medvedev, enough to guarantee his spot in the ATP Finals for the first time.

There he would lose in all three of his matches to Djokovic, Zverev and Medvedev but his year should never go unrecognised, maximising everything that he has and working as hard as ever.